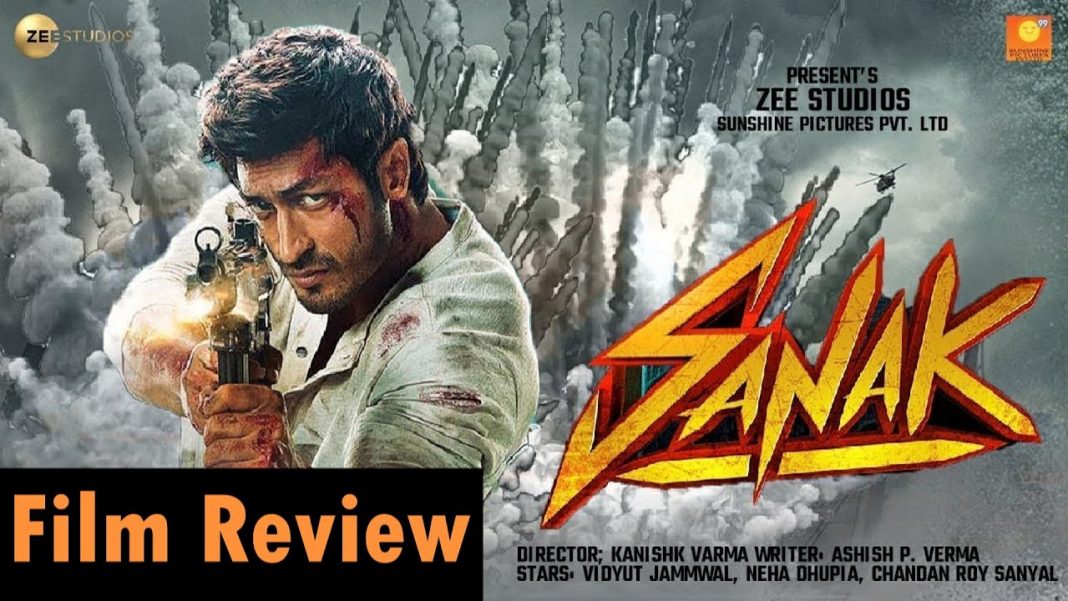 Sanak is a Hindi Film released directly on OTT platform Disney+Hotstar on 15 October 2021.

Vipul Amrutlal Shah is the producer of Sanak. Pratik Deora is the Cinematographer, and Sanjay Sharma is the Editor of the film.

Sanak is a story of the emotional journey of a young man Vivaan Ahuja (Vidyut Jammwal). He wows to save his wife and other hostages from the perils of evil in a Hospital. Will he get success in the rest of the story?

Anishka Maitra (Rukmini Maitra) lives with his loving husband, Vivaan Ahuja (Vidyut Jammwal). Anishka is suffering from a heart problem and needs immediate surgery. Vivaan admits her to a hospital, and doctors assure him a speedy recovery of his wife.

There is a parallel story of Jayati Bhargav (Neha Dhupia), a top Police officer. Her young lad Aanya (Adrija Sinha) visits a hospital with her ailing friend. The terrorist finds her a soft target and packs her with explosives.

Anishka (Rukmini Maitra) recovers and gets discharged from the hospital. Vivaan (Vidyut) reaches the hospital to bring her wife back home. However, a terrorist attack is there on the hospital, and the terrorists have sieged the hospital.

Saju (Chandan Roy Sanyal) is the leader of the terrorist group. He wants to free a criminal, Ajay Pal Singh (Kiran Karmarkar), under treatment in the hospital.

Jayati Bhargav (Neha Dhupia) is leading the police team, handling the terrorist attack. She, however, feels helpless when she sees her daughter covered with explosives. However, Vivaan decides to save his wife and other hostages, including the daughter of Jayati Bhargav.

Will, Vivaan be able to release the hostages from the siege with his mind- game, or not, is the rest of the story.

Ashish P. Verma has written the screenplay of Sanak. The story is an ordinary one, which we have seen in many films. The writer has focused on the lead character and has forgotten to pay attention to other characters.

Vidyut is an action hero, and he does his job well. However, the writer has shown some weird things in the film, which are not digestible. For example, some hostage people behave as nothing has happened there. They seem to enjoy the situation, which looks awkward.

Vivaan takes law and order into his hands. He starts planning to uproot the terrorists and save the hostages, including his wife. However, the police stay outside the hospital like a spectator. The film is far behind the practical aspects of life.

The worst part of Sanak is its pace. The film starts well and seems interesting, but it loses its charm soon. Sanak tests the patience of the viewers after a few minutes of initial interest.

Vidyut is good at his job. He has done action scenes and stunts with his unique style, which looks extraordinary. He has justified his presence in the film.

Rukmini Maitra has made her Bollywood debut as an actress. She is average in her debut film. Chandan Roy Sanyal is a versatile actor and has proved his acting skills in his previous films/web series.

Supporting characters are good in the film, but Neha Dhupia and Kiran Karmarkar had nothing to do much despite having impactful roles. However, Adrija Sinha is quite good as Aanyam, daughter of Jayati (Neha Dhupia).

Sanak is the 2nd directorial of Kanishk Verma. He earlier directed Footfairy, a Crime Thriller, released in 2020. Though Foofairy was a low-budget film yet Kanishk made a good impact on his direction. Perhaps that is why he got the opportunity to direct Sanak. But Kanishk Verma has failed to repeat the magic, and the film becomes a flat one.

There are four songs in Sanak. Jeet Ganguli and Chirantan Bhatt are the music directors of these four songs. Rashmi Virag and Manoj Yadav have penned the lyrics for the songs.

Song O Yaara Dil Lagana is a remake of the same title from Agnisakshi (1996). Song Aankhen Mili is a Romantic number. Manoj Yadav has penned both songs, and Chirantan Bhatt has composed them.

Song Suna Hai is in two versions. Jubin Nautiyal has sung the male version, whereas Shreya Ghoshal has lent her voice to the female version.

Music is not an extraordinary one but good with meaningful lyrics.

Sanak is a good Action film but not an entertaining film. The film is available to watch free of cost on the OTT Channel, but we doubt its success.

IMDB users have not rated the film until I completed this review. However, the team of Bollywood Product rate Sanak a dull one and gives it 5 out of 10.