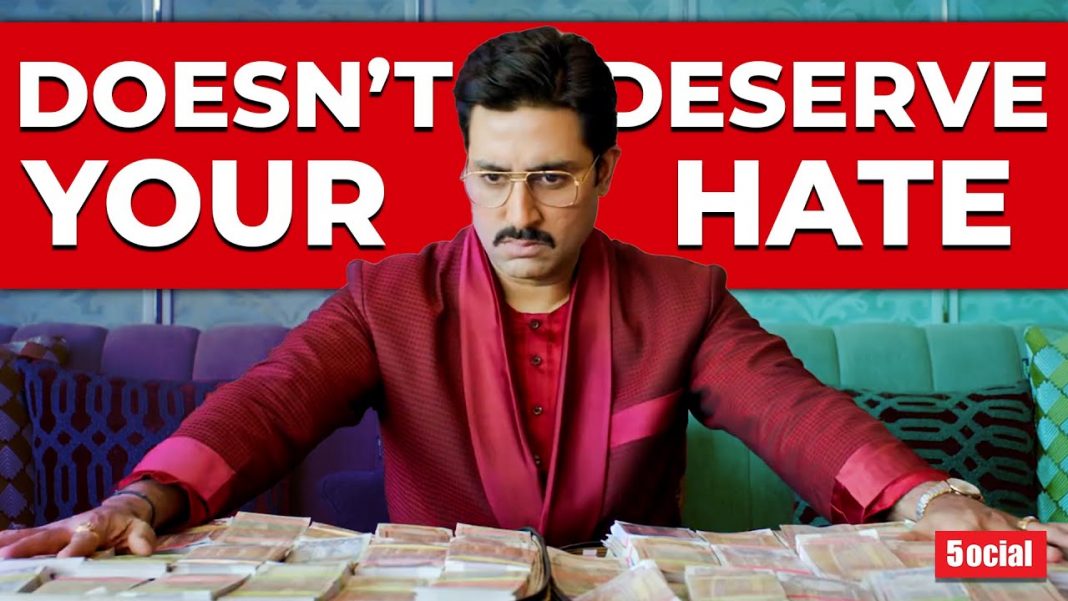 The Big Bull is a Biographical Crime Drama Bollywood film released on 8 April 2021 directly on the OTT platform Disney + Hotstar. Anand Pandit and big gun Ajay Devgn have jointly produced the film. Kookie Gulati has directed the film whose last Bollywood directorial was Prince (2010). Here is the Film review of “The Big Bull”.

The Big Bull depicts the story of Harshad Mehta who was involved in financial scams over more than 10 years from 1980 to 1990.

Hiten Shah (Abhishek Bachchan) lives with his younger brother Viren Shah (Sohum Shah) and mother (Supriya Pathak). He likes Priya Patil (Nikita Dutta) and wants to get married to her. However, her father has a checklist for his daughter’s marriage, which Hiten is unable to complete.

Hiten gets a tip of the share market and he invests in the market and gets some money. And that is not it; he becomes Sub-Broker and ultimately a Broker in the stock market by accepting all means. Hiten soon becomes the big tycoon in the world of Share Market and people call him Big Bull. He gets married to Piya and continuous to grab every opportunity for earning big money.

However, some rules of economics are always remaining true and so as in this story too.

Abhishek Bachchan has portrayed the titular role of Harshad Mehta. Nikita Dutta, Ileana D’Cruz, Sohum Shah, and Saurabh Shukla are among the other lead star cast. Ram Kapoor, Samir Soni, Supriya Pathak Shishir Sharma, and Mahesh Manjrekhar are among some of the supporting characters.

Before a few months, ago not many people were aware of Harshad Mehta. However, a web series namely Scam 1992 told everyone about Harshad Mehta and his scam. The series was one of the most popular web series in India.

Since the small screen is an easy medium to reach people, most film lovers knew the story of Harshad Mehta before the release of The Big Bull. Now to attract audiences, the Big Bull must have a tightly written script, a fantastic direction with some mind-blowing performances.

Being a film critic and a big film lover it was beyond my imagination to have Kookie Gulati as a Writer-Director whose last Bollywood directorial Prince (2010) was a super flop film.

I anticipated the film as an average one but surprisingly the film turned out to be a great surprise for me. Unexpectedly well-written script with above-average directions by Kookie Gulati. Limited songs that too lead the story to the next level.

Kookie Gulati has done extremely well in the writing field and in the direction field too. He has carved every character in such a smart way that even a small character keeps paying in the mind after the film ends.

The entire film is over the shoulder of Abhishek Bachchan. He has again done an excellent job after his last two releases Breath (web series) and Ludo (2020). Moreover, other supporting characters have also done extremely well. Taking the name of Sohum Shah, Ileana, Nikita Dutta, Supriya Pathak, Saurabh Shukla, Samir Soni, and many others would justify the statement. Everyone leaves his or her mark on the pavement.

There are some moments when the film goes slow and the editor could do well with cutting around 10-15 minutes of the film. However, Bollywood Product still recommends the film to watch with family and friends at home because of a well-scripted film with good direction and excellent performances by almost every character of the film.

An average IMDB rating is 4.9 which is given by 1123 users at the time of writing this article. However, Bollywood Product rates the film 7 out of 10.