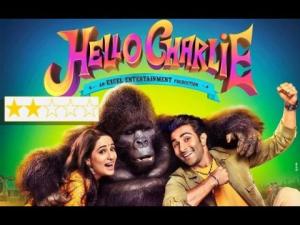 “Hello Charlie” is a Bollywood Comedy film that started streaming on Amazon Prime Videos on 09 April 2021. Pankaj Saraswat, an actor, writer, and Television Film/Video director made his Bollywood Big Screen debut as a Director. He has also written the screenplay of the film. Whereas, Abhishek Khairkar has written dialogues for the film.

Farhan Akhtar produced the film once again with his close friend Ritesh Sidhwani. Tanishk Bagchi and Kanika Kapoor have composed songs for the film and John Stewart Eduri has worked on Background Music. Here is the film review of Hello Charlie.

Charlie (Aadar Jan) is a happy-go-lucky young man. He lives with his maternal uncle and trying to find a suitable job. However, he is fired from every job every time he tries a new job.

He meets Mona (Elnaaz Norouzi) who wants a Truck to carry a Gorilla to another city to dance in a fare. She offers a hefty sum for this work which needs to be done immediately.

Charlie decides to shift the Gorilla in his Uncle’s Truck while his uncle was away from Town. However, Charlie does not know that a big cheater Mr. Makwana (Jackie Shroff) is there under the skin of Gorilla.

The journey begins and hilarious situations occur during this journey. The film depicts the journey of Charlie with the so-called Gorilla.

The film is a light comedy-drama and does not lose its pace throughout the film. However, there are some moments when you can go to fresh-n-up. Yet the overall film is good to watch. Kids would like this movie very much.

Pankaj Saraswat has had first written the screenplay and then directed the film. He has gracefully managed to make an impact with his debut film.

Aadar Jain faced the camera for the first time confidently. Jackie Shroff is there with a unique role he has not before. The rest of the characters have got little onscreen space. However, every character has made his/her impact with his/her small role.

The film throughout makes the audience keen to know ‘What Next?’ Though it is not And the climax has also brought different sheds of life. Though negative reviews are there about the film Though it is not a suspense movie yet the film creat curiosity for upcoming events.

Like every other film, this also has moments it goes slow. Good editing could make the film better.

However, Bollywood Product still recommends the film to watch with family and especially with kids at home. The light-hearted comedy would bring a smile to your face while watching the film

An average IMDB rating is 6.8 which is given by 235 users at the time of writing this article. However, Bollywood Product rates the film 7+ out of 10 being a complete entertainment family package for kids and family.