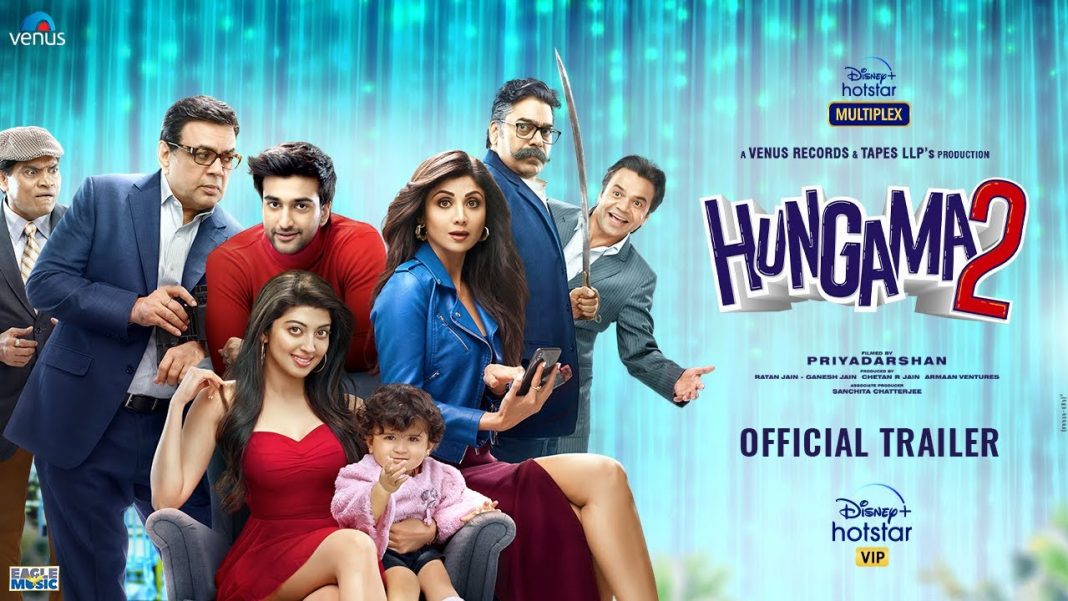 Yunus Sajawal has written the Screenplay, whereas Anukalp Goswami and Manisha Korde have jointly written the Dialogues.

Hungama 2 is a Spiritual Sequel to the 2003 Bollywood Film Hungama directed by Priyadarshan too. Hungama 2 is based on a Malayalam film Minnaram (1994).

Priyadarshan also directed Minnaram. However, Hungama 2 has a changed climax with a molded story.

Vaani (Pranitha Subhash) claims to be the mother of Aaksh’s (Meezan Jaffrey) baby child. Aakash denies the allegation. However, Vaani has some stories that Aakash cannot deny.

Aakash is going to marry soon. He thus turns every pebble turn to throw Vaani from his house.

These children are very undisciplined. They make run of every Tutor hired by the Colonel to teach them. Cook Nandan (Tiku Talsania) is also an integral part of the family.

Advocate Radhe Tiwari (Paresh Rawal) lives near the Colonel’s house with his wife, Anjali (Shilpa Shetty). The Colonel treats Anjali like his daughter. Aakash too treats her like his sister and shares everything with her.

The Colonel has fixed Aakash’s marriage with his business partner’s (Manoj Joshi) daughter, and the engagement date is approaching soon.

Vaani Kapoor (Pranitha Subhash) enters in Colonel’s house with a baby named Gehna. She claims that Aakash is the father of Gehna.

On inquiry, Aakash denies recognizing Vaani and her daughter. However, Vaani makes the Colonel believe that there is something wrong at the bottom.

Since the engagement date is approaching, the Colonel wants to sort out the issue before his business partner Bajaj (Manoj Joshi) knowing about it. The entire family, including the Cook, helps the Colonel to hide the truth from Bajaj.

Aakash tries to throw Vaani from his house. However, the Colonel stops his doing so. Moreover, a DNA test also proves that Gehna is the daughter of Aakash. But Aakash is still not ready to accept Gehna as his daughter.

In the meantime, Aakash seeks the help of Anjali to stop Vaani from reaching his engagement. He and often meets Anjali that leads to doubt in the mind of Anjali’s Husband. What happens next is the rest of the story.