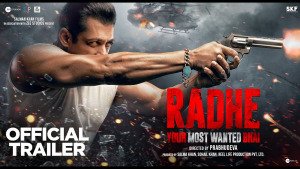 Your Most Wanted Bhai

Radhe is a Bollywood Action Film that releases on 13 May 2021. Radhe is the first Indian film to be released simultaneously on Theaters and the OTT Platform. The film is available digitally ZEE5 and on ZEE Plex on Demand.

Radhe is the first Indian film that releases simultaneously on Theaters and OTT platforms.

Salman Khan and his younger brother Sohail Khan have produced the film along with Atul Agnihotri.

Salman Khan, Disha Patani, Randeep Hooda, and Jackie Shroff have played pivotal roles in the film. Jacqueline Fernandez has made an Item Number in the Film.

Radhe is a remake of the Korean film The Outlaws (2017). Kang Yoon-sung directed the film. However, the story line has been redesigned for Indian audiences.

Salman Khan has played Radhe, a rough and tough cop, in the film. Disha Patani has played Diya, the female lead opposite Salman Khan. Jackie Shroff has played Avinash, Brother of Diya and senior to Radhe. Randeep Hooda has played Rana, leader of the drag mafia.

The character Radhe was earlier used in the film Tere Naam (2003) an Wanted (2009). Salman Khan played an undercover Cop in Wanted, whereas, Govind Namdev played Police Commissioner in the film.

Jacqueline Fernandez made a special appearance in the song Dil De Diya.

The story revolves around a drug mafia hard to be handled. The city Police Commissioner thinks that rough and tough cop Radhe can handle them. However, Radhe has his own rules and regulations which are not written in any rule book.

College and School children are dying due to the consumption of drugs. Police Commissioner decides to call Radhe (Salman Khan) who is running under suspension.

Radhe meets Diya (Disha Patani) and falls for her in the first meeting. Diya is a Model and thus Radhe pretends to be an aspiring model.

Avinash (Jackie Shroff) is the immediate Boss of Radhe and wants to do everything within the rules. However, Radhe finds a weakness in Avinash who preferred to keep silent in the love matter of Radhe and his sister.

Rana (Randeep Hooda) is the man behind the drug supply in Mumbai. Girgit (Gautam Gulati) also works with him.

Rana finds two gang leaders Dilawar (Sudhanshu Pandey) and Dagdoo and kills Dilawar. Rana also kills the goons of Dagdoo and compels him to work with him. He did it to expand the area of his selling drugs.

Radhe soon finds Rana and wants to arrest him. However, Rana manages to flee with his two goons. Now the sole aim of Radhe is to catch Rana at any cost.

Radhe reminds us of the film Wanted (2009). In Wanted, Salman played a Goon who kills people for money. However, it is revealed just before the climax that he is an undercover cop. The secrete is revealed when his father (Vinod Khanna) is shot dead by the dreaded gangster (Prakash Raj).

If we analyze Salman’s last few films, it is clear that his films are for Masala-loving audiences. Loosely written screenplay with average direction. Yet the films have done magic on Box-Office. This happens due to the presence of Salman.

Salman is a very big name and films are being sold by his name only. No matter how pathetic the film is. Salman can single-handedly sail the boat and win the race.

When you watch see Radhe comparison is obvious with Wanted. The first half of Radhe is below average. The first half seems made for praising Radhe only. Frankly speaking, the film praises Radhe (Salman Khan) more than enough.

There is nothing much to say about the storyline. Every Salman Khan fan can easily imagine what happens in his films. Radhe is also an ordinary action film..

Prabhu Deva is an excellent dancer and perhaps no one can beat him in the field of dancing. But is he a good director too? I would say No with a heavy heart.

Wanted was a big hit and Prabu Deva had played his role very well as the Director. But just look around about his other films.

R… Rajkumar, Action Jackson, Singh Is Bliing, and Dabangg 3 are some of his recent directorial. There is not a single movie in which the direction part can be called extraordinary.

Wanted (2009) was an excellent work of Prabhu Deva. Wanted was also Masala Action film but it was the pace of the film, which never went slow. Radhe completely lacks on this point. Prabhu’s direction seems very ordinary in the film.

Prabhu Deva makes Masala Films for Mass and not for Class. So his movies run good business in small centers. However, Radhe nowhere stands in front of Wanted.

Vijay Maurya and A.C. Mughil have written the Screenplay. The screenplay is very ordinary and written in a hay-wire manner. The script is a very loose one and can not be called a good one.

Salman Khan is the key character of the film and the entire film revolves around him. Nothing extraordinary in his acting but his presence makes the film engaging.

Disha Patani gets very less screen space. But she looks pretty and energetic whenever seen on the screen. Randeep Hooda looks awesome as a dreaded criminal. He acts like a psycho man, which suits his character.

Jackie Shroff looks good doing comedy in the first half of the film. Thereafter, he neither gets much screen space nor the entertainment part.

Gautam Gulati as Girgit is the surprise pack of the film. He has done a very good job in his small role.

Megha Akash is a cop and works with Radhe. She has a small but impactful role.

Sanchit Balhara has created a Background Score. He has done a good job. Devi Sri Prasad, Himesh Reshammiya, and Sajid-Wajid have composed songs for the film. Unfortunately, Wajid left us last year but his name remains intact with the film.

If we compare the music with one of Wanted we can easily differential the quality of songs. Though the song Seeti Maar has gained enormous YouTube views yet when we compare all songs of Radhe with that of Wanted difference is implicit.

Though the songs are good but unnecessarily stuffed in the film. Especially the last two songs and more specifically the song Seeti Maar, which is the last song of the film.

Salman Khan himself is one of the reasons to watch Radhe. The buzz created for Radhe is only due to the presence of Salman Khan.