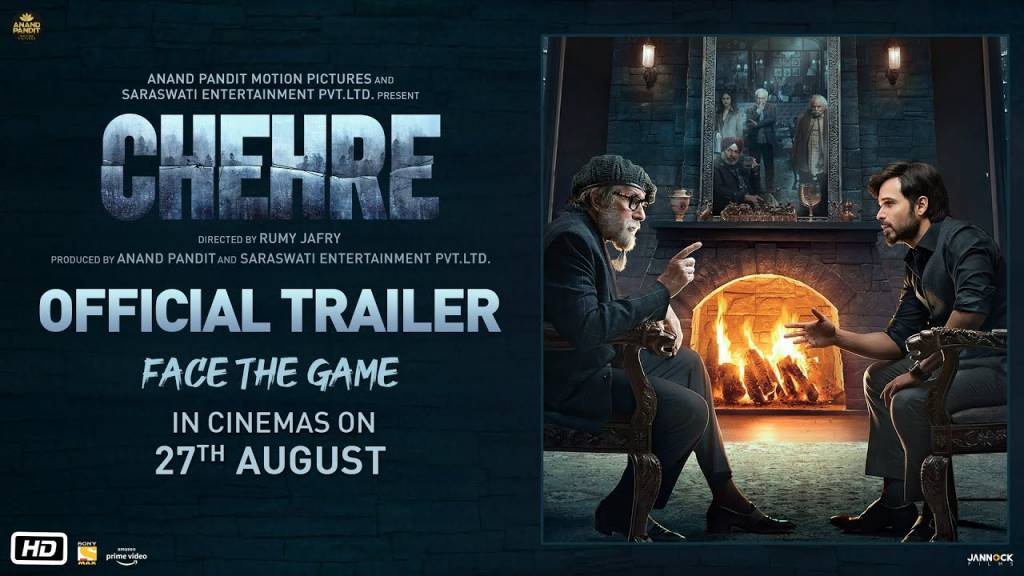 Chehre is a Mystery Thriller Bollywood Movie released in Cinemas on 27 August 2021. Initially, the release date for the film was 17 July 2020 (India). However, the film got postponed due to Covid 19 pandemic. The makers again announced the release date of 9 April 2021 for theatrical release. However, the film did not release on that day. In the end, the film got released in cinemas on 27 August 2021, while cinemas were still running with 25% to 50% occupancy.

Amitabh Bachchan, Emraan Hashmi, Annu Kapoor, and Dhritiman Chatterjee are there in the lead roles. Krystle D’Souza has played the spouse of Samir Soni. Rhea Chakraborty has played a house attendant of Justice Jagdish Acharya (Dhritiman Chatterjee). Siddanth Kapoor (Son of Shakti Kapoor) receives less screen space. However, he has done justice with his small but effective role. Raghubir Yadav is also good.

Business tycoon Sameer Mehar gets caught in a snowstorm. He meets Paramjeet Singh Bhullar (Annu Kapoor), who takes him to the house of his friend Justice Acharya. At Justice Jagdish Acharya (Dhritiman Chatterjee). Here Sameer meets with Lateef Zaidi, another friend of Bhullar and Justice Acharya. These friends use to play a psychological game together in which they claim to do justice. Sameer also becomes part of this game.

Sameer feels as if this game is gradually becoming a scary reality now. He also feels not safe and trapped in a web of deceit. Sameer wants to get quit the game, but there is no provision to leave the game. Moreover, there is no scope to run out of the house. There are only snow-covered mountains outside the house, and Sameer gets stuck in this game. What happens next is the story of this film.

Musical duo Vishal and Shekhar have composed the songs along with Gourov Dasgupta. There are only two songs in the movie. The Song Rang Dariya, which features Emraan Hashmi and Krystle D’Souza, and a Title Song.

Yasser Desai has sung Rang Dariya. Gourov Dasgupta has composed the music for the song. Farhan Memon has penned the lyrics.

Great actors like Amitabh Bachchan, Emran Hashmi, Annu Kapoor, and Dhritiman Chatterjee are there in the Chehre. If Amitabh Bachchan has chosen a movie, he must have found some potential in the script.

Chehre is a Hollywood-style movie that you have to keep your mind together to watch it. Chehre is not a Bollywood masala film, nor is it a fast-paced thriller of Abbas-Mustan style. The film reaches a standstill and almost the entire story runs in a house itself. So in such a situation, the film becomes a bit monotonous in the first half. However, a movie lover would like to watch this film till the end. Although there is nothing in the climax that you have not seen before, the film will not give you a chance to take your eyes off the second half.

In short, this is a good film for those who like Suspense and thrillers films. However, the audience expecting Bollywood spices might not like the film much.
Chehre is more likely to be praised by Multiplex audiences. Masala movie lovers might not appreciate the idea behind the movie.

You may find it hard to understand the movie at the beginning of the film. However, the movie gradually grabs your nerves, and you understand everything before the film ends.

Amitabh Bachchan is himself an acting institution for all of us, and no one can judge him. Because in his long span of an acting career, the great angry young man has shown every flavor of life and has made movies memorable on his own. He is such a great actor that the writer keeps in mind his character while writing the script.

Mr. Bachchan has done exceptionally well in Chehre and has created a new milestone in his acting career.

Emran Hashmi is, without a doubt, a good actor. He has already proved this fact with his latest released film The Body (2020). As a bewildered murderer who wants to live his life with his lover, Emraan did exceptionally well. Emraan has also played well as Sameer Mehra in Chehre.

Annu Kapoor has portrayed a Sikh character Permjeet Singh Bhullar. He deserves a round of applause for his acting in Chehre. Dhritman Chatterjee has done justice while playing the role of a Justice.

Raghubir Yadav is ok but we have seen him doing much better in his earlier films. Krystle D’Souza is a TV Actress and she has yet to prove her acting skills in Bollywood. However, she seems ok in the small screen space she shares with the big guns of Bollywood.

Rumy Jaffery is directing the Movie Chehre (2021 Film). He has not directed any Bollywood Movie in the last eight (8) years since he directed Akshaye Khanna and Mugdha Godse in the film Gali Gali Chor Hai (2012).

Rumi has directed two more movies, apart from Gali Gali Chor Hai, i.e. God You Are Great (2008) and Life Partner (2009). However, none of them is a Mystery Thriller. Thus, he has done a great job with his first Thriller film. The screenplay is tight and very well knitted.

IMDB users have not rated the film yet at the time of writing this post. However, Bollywood Product rates Chehre 7 out of 10.